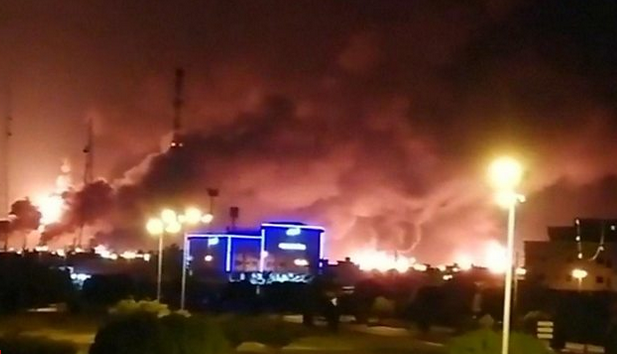 Reuters reports that up to 5 mbpd of production had bee impacted — half of Saudi Arabia’s output — as the attacks hit the world’s biggest petroleum processing facility.

Houthi rebels from Yemen have repeatedly launched drone attacks but have never had this level of success. Reuters reports there were 15 ambulances on the scene and that Aramco was holding emergency meetings.

The fires are reportedly under control but damages are unclear. Saudi Arabia responded by bombing Houthi positions in Yemen. A Houthi spokesman pledged to widen attacks and these are evidence they can strike more than 800km from the border.

Judging by the videos, it looks like a major event. Expect a jump in oil prices at the open.