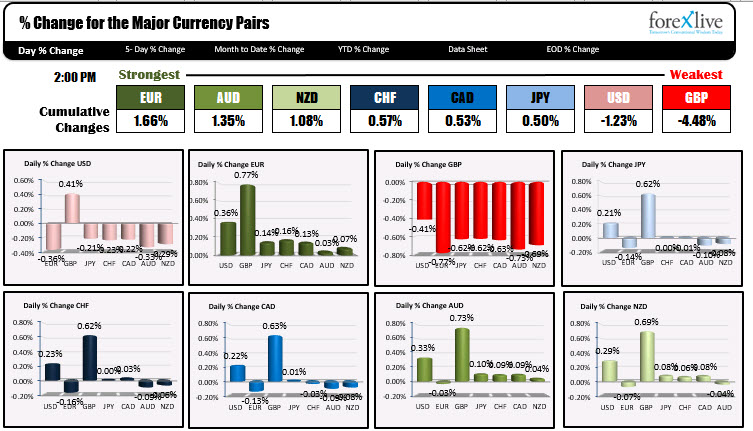 The dollar slumped marginally in post-Turkey day hangover trading.   There was no economic data, but stocks did rise with both the S&P and Nasdaq index closing higher and a record levels (flow out of the safety of the greenback?).  Hopes for Covid vaccines may also help risk on in non-US countries.  It is hard to see how Thanksgiving will lower the trajectory in the US, however, which may be a dollar negative.

Although the USD was weak, the GBP was still the runaway weakest of the majors. The pound fell in reaction to negative Brexit news from the EU.  However, the GBPUSD initially bounced off support at it’s 200 hour MA. Later in the session, the pair gave up those bounce gains and closed below the 200 hour MA at 1.33115.  Contributing to the fall in the GBPUSD in the North American session was the sharp rise in the EURGBP that saw the price extend back above it’s 200 day MA at 0.89549 (after spending the last 5-days below the level).  The EURGBP is closing near highs for the day at 0.8990 and not far from it’s November 12 swing high at 0.9003.

While the GBP and the USD were the weakest of the majors, the EUR, AUD, NZD were the beneficiaries of their declines.  Each had similar gains.

For the EURUSD it traded to new week, month and near 3 month highs (highest level since September 1).  The next target to get through is 1.1965.  The high price for the year is up at 1.2010 from September 1.

The AUDUSD traded to its highest level since early September. The high reached 0.7398. The September 1 high comes in at 0.74128.  Get above that level and the door opens for more upside potential next week.

Below are the rankings of the strongest to weakest for today.